Few things in Japanese life are as sacred as the high school baseball tournaments at Koshien Stadium in Nishinomiya, near Kobe. The tournaments are played twice a year — a spring invitational of teams from around the country lasting 10 days and a summer tournament involving 49 regional title winners for the national championship.

The nation stops to watch the daylong telecasts on NHK from start to finish.

Baseball is the national sport of Japan and is infused with the ethos of the martial arts inspired by the ancient samurai, characterized by exceedingly intense year-round training with a focus on spiritual development and character-building.

The amateur version of yakyuu (field ball) dates back to the late 19th century. The summer tourney began in 1915 in the Osaka suburb of Toyonaka and the spring invitational in 1924 at a small park in Nagoya. Both tournaments were moved to the newly constructed Koshien Stadium after it opened in August 1924 and made that park their permanent home. Koshien Stadium became the largest sports arena in all of Asia with 60,000 capacity.

At tournament time, both events overshadow the professional game. Writers have called the tourney the “ultimate crucible of youth.” Film director Masahiro Shinoda called the participants “Japanese gods,” the stadium itself “a temple of purity.”

This year, for the first time since the Second World War, a tourney, spring’s Senbatsu , has been canceled, due to the coronavirus. The announcement by Masahiro Maruyama, the chief executive of the Mainichi Shimbun and the tournament’s chairman, dominated the news media.

TV networks interrupted their programming including an impromptu news conference with Japanese Olympic Committee chief Yoshihiro Mori about the Tokyo 2020 Games to report the cancellation. The nation’s top dailies reported it on the front page, while Japan’s ubiquitous sports dailies gave it multi-page coverage.

In late February, Prime Minister Shinzo Abe had called for school closures until April and urged that large gatherings be avoided. The Japan Sumo Association held a tournament behind closed doors for the first time in the sport’s long history, while pro-baseball exhibition games were also closed to spectators.

But high school baseball is different. Hordes of supporters descend upon the area from all over the country at tourney time to pack the Koshien ballpark and surrounding hotels and ryokans. The tournament is the closest thing Japan has to a national festival. It is special.

Maruyama said he had considered holding the tourney before empty stands like sumo and pro baseball, with precautionary measures, issuing three masks a day to the players, spraying their hotel rooms, having doctors on call 24/7. But when he considered the family members and support groups who normally travel to Koshien and would be deprived of the joy of cheering for their team, he just could not go through with it.

“This is a bitter decision,” said Maruyama. “We are filled with a sense of regret over this unfortunate outcome.”

So was everyone else, it seemed. “It’s terrible to end it like this” ran another headline in the Nikkan Sports, Japan’s leading sports broadsheet.

A particular issue for many was the emotional impact on the players most of whom have practiced six or more hours a day, 365 days a year. 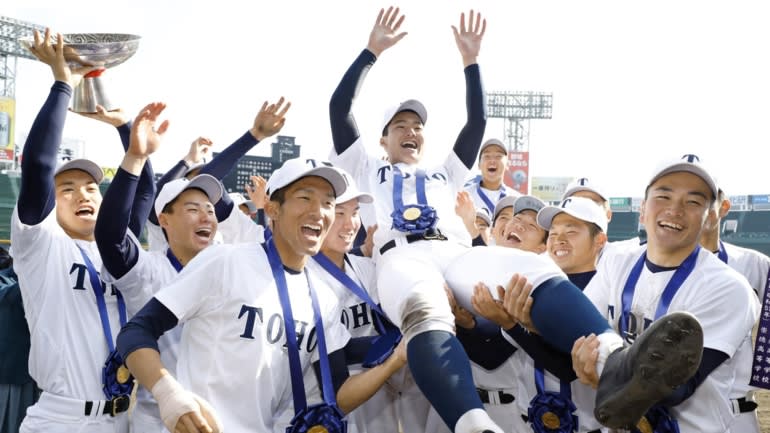 Playing at Koshien, the ground zero of the Japanese game, is a dream among young Japanese ballplayers. To make it there is a rare honor, bringing one lifelong recognition. Scooping up dirt from the Koshien infield as a postgame souvenir is a time-honored tradition. Winning a championship can send an entire prefecture into throes of ecstasy and a star player can secure a lucrative contract with one of Japan’s 12 professional clubs.

On hearing news of the cancellation, players on teams invited to the tournament could be seen weeping in disappointment.

The chairman of the High School Baseball Federation said he hoped a way could be found at a later date to let players from the 32 schools invited to the spring tourney to play at Koshien, perhaps for an exhibition game or a practice session, or even it was just to set foot on the sacred ground. That is how important he thought the experience was.

In a front-page interview with the Nikkan Sports, former Koshien and Yomiuri Giants pitching star Suguru Egawa proposed combining the spring and summer tournaments and playing them in August. 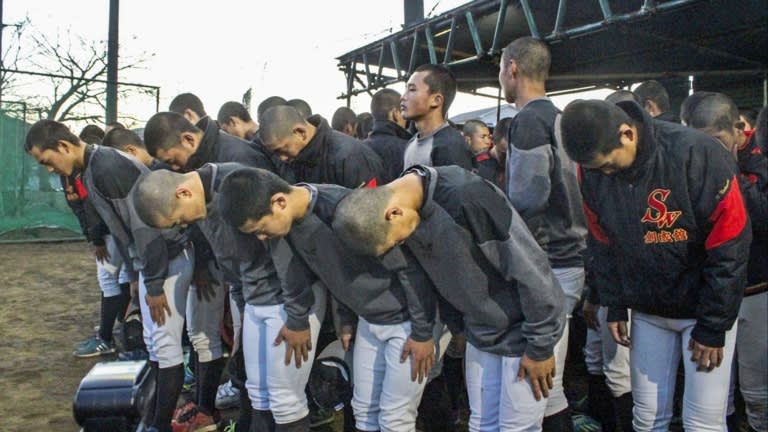 Players of Sohseikan high school which baseball team is invited to the tournament bow at the end of practice as per ususal, after hearing the cancellation.   © Kyodo

If that was not possible, then he proposed at the very least allowing players on the invited teams to go to Koshien and practice for 20 to 30 minutes before the regularly scheduled summer games and then take home that coveted sack of dirt. At least they would have that memory.

That sentiment was echoed by dozens of other sports stars and commentators. In a survey of fans by the Hochi Shimbun, 61% of respondents said it was necessary to do something to salvage the situation for the boys.

The Koshien spring tournament has had its share of dramatic moments and memorable feats. In the 2013 spring invitational, Tomohiro Anraku of Seibi High School threw an astonishing 772 pitches in 10 days. It was about five times the medically allowed limit in the U.S., where the general rule is 120 pitches a week to protect against arm injury.

However, in Japan, the single elimination format breeds a win-at-all-costs philosophy, in which pitch-count guidelines are ignored. The pitch count record for a Koshien summer tourney is 948, by Yuki Saito in 2006.

Anraku refuses to admit he threw too much. He now plays for the Rakuten Golden Eagles, but his performance has been mediocre at best, periodically suffering from a sore arm.

The cancellation of the 2020 Spring Tourney has a bright side, although I doubt few in Japan will agree with me. It will save some ace pitcher the task of having to pitch every single inning of his team’s games to make it into the finals, as Anraku did. This pitcher may be deprived of great glory but he may also be saved the risk of serious arm injury and a premature end to his career.

Only six schools have won both the spring and summer tournaments in the same year. However, 19 schools have been forced to withdraw from the spring competition for assorted misbehavior by individual team members, including smoking, assault and drink-driving. The samurai ethos of collective responsibility was the one thing more important than winning.