Lessons from a Japanese baseball maverick

Yutaka Enatsu unleashes a pitch while playing for the Hanshin Tigers in 1975. A Japanese sporting legend, he was as famous in Japan for his notorious lifestyle as for feats on the mound.    © JijiROBERT WHITING, Contributing writerAugust 21, 2020 08:00 JST

TOKYO — The delayed opening of the Major League Baseball season in the U.S. in July has prompted much talk about the return of Japanese pitcher Shohei Ohtani, the Los Angeles Angels star whose 160 kph fastball is the quickest in Japanese baseball history. Ohtani, who suffered an arm injury last season, disappointed in his first two games and is now out of action as a pitcher for six weeks. Many fans may not be aware, however, of Yutaka Enatsu, a Japanese sporting legend who was better than Ohtani but is as famous in Japan for his notorious lifestyle — and its dramatic culmination — as for his baseball feats.

Enatsu was a starting pitcher for the Hanshin Tigers in Japan’s Central League from 1967 to 1975, before arm trouble forced him into a closer’s role, in which he lasted another nine years. At 1.8 meters and 77 kg he was not a big man, but he could throw a fastball at nearly 160 kph and a curveball at more than 140 kph. He set many records that still stand in Japan, including 401 strikeouts in one year (surpassing Sandy Koufax’s MLB record), and 41 consecutive scoreless innings pitched as a starter. By any measure used to rate pitchers — including strikeout ratios and runs allowed — Enatsu was superior to Ohtani.

Unlike Ohtani, Enatsu never made the shift to the MLB, but he would have been a major star on baseball’s biggest stage had Japanese restrictions and public opinion allowed him to go when he was at his best — although he might also have wound up in a U.S. prison.

“He was something else,” said former New York Yankees star Cletis “Clete” Boyer, who batted against Enatsu while playing for the Taiyo Whales from 1972 to 1975. “At his best, he was as good as anyone I ever faced,” said Boyer. “His fastball literally exploded at you.”

Born in 1948, Enatsu grew up in the entertainment section of Osaka, a tough thicket of bars, nightclubs and restaurants. After being kicked off his junior high school baseball team for fighting, he refocused his energies and went on to become a standout pitcher for Osaka Gakuin High School. At 18 he was the top pick for Japan’s Nishinomiya-based Hanshin Tigers. 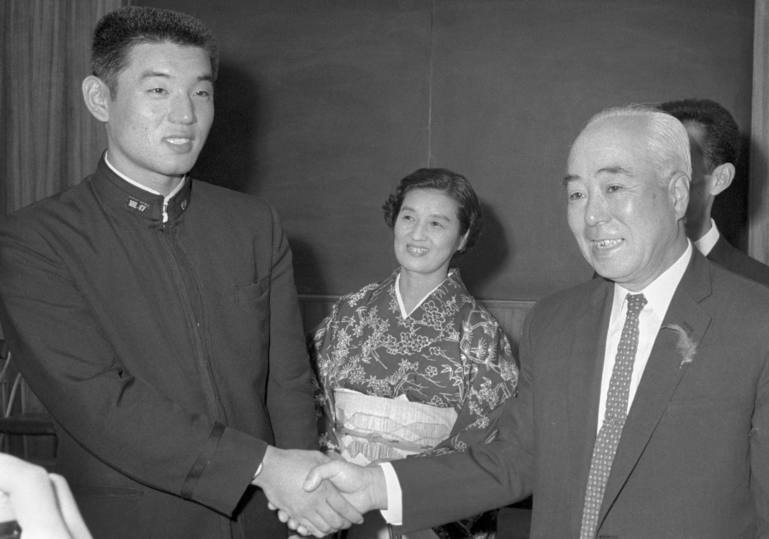 An 18-year-old Enatsu, with his mother looking on, shakes hands with Hanshin Tigers executive Kazutaka Tozawa at a 1966 signing ceremony in Osaka.     © Kyodo

The key to Enatsu’s success was perfect control. “His curveball did not have a big break on it, but he threw everything from exactly the same motion,” said Tigers catcher Yasuhiko Tsuji. “It was impossible to tell what pitch he was throwing. When the breaking ball did come, in the wake of his blinding fastball, it threw the batters off.”

In time, though, Enatsu became as famous for his off-field behavior as for his pitching. He smoked 100 cigarettes a day and spent his nights playing pachinko and mahjong and drinking in Osaka nightclubs. He was unaffected by the youth counterculture of his time, preferring to socialize with Osaka’s swaggering yakuza (gangsters). Enatsu had grown up admiring the fabled gangland credo of duty and obligation, based on the code of the samurai. When he joined the Tigers, veteran players introduced him to drinking establishments favored by gangland figures.

Movie director Kosaku Yamashita, who cast Enatsu in a supporting role in the 1985 underworld film, “Saigo no Bakuto” (The Last Gambler), said, “You looked at him and he acted like a gangster, a yakuza. He had that swagger. He really fit the part.” In 1970, Enatsu was suspended briefly when it was discovered that he had accepted an expensive wristwatch from the powerful Takenaka-gumi gang. Hanshin tried many ways of cultivating greater team spirit in the club’s problem player, whose lackadaisical attitude toward practice was upsetting team harmony. During the 1970 offseason, for example, he was ordered to take a part-time job in an Osaka department store to learn how to “deal humbly” with people. In the winter of 1971, his manager took him to a Zen Buddhist temple on a retreat, where he was made to rise at dawn, meditate on his knees for seven hours a day, clean toilets, and complete other spirit strengthening exercises. None of these efforts met with a great deal of success.

In May 1971, after a series of sluggish performances, Enatsu was diagnosed with a heart condition, and told that his macho lifestyle would end in an early grave. Advised to give up at least one of his four favorite activities he replied: “I can’t think of life without my postgame cigarette; I’m too addicted to women and mahjong to give them up; so I guess it will have to be drinking.”

In 1974, having worn out his welcome at Hanshin, Enatsu was traded to the Nankai Hawks of the Pacific League, where, after much persuasion, he agreed to become a closer — a rarity in Japan, where starting pitchers were routinely expected to throw complete games. The move resurrected his career, easing the strain on his body. Friends and former teammates toss Enatsu into the air at his retirement ceremony in Tokyo in 1985.    © Kyodo

“Enatsu was good because he knew how to use ma (negative space),” said Masaichi Kaneda, the pitcher with the most wins in Japanese baseball. “He waited for just the right moment — a lapse of concentration by the batter — to deliver the pitch. In that sense, he could really read the batter’s mind. He is a better pitcher than I ever was.”

In 1983, after successful stints with the Hiroshima Carp and the Nippon Ham Fighters, Enatsu was traded to the Seibu Lions in Tokorozawa, outside Tokyo. At Seibu he clashed with manager Tatsuro Hirooka, a disciplinarian and health food advocate. Hirooka, unhappy with Enatsu’s weight and chain smoking, among other things, dispatched him to an affiliated minor team in midseason to get into shape. Enatsu, affronted, left before the season ended (leaving a safe full of cash in his cubicle).

After an unsuccessful tryout with the MLB’s Milwaukee Brewers, he retired and turned to journalism, prompting complaints about his underworld friends, whom, according to the Sankei Shimbun newspaper, he would ensconce in the press box. Then, after his wife of nine years left him in 1984, dark suspicions of drug use arose. Enatsu was seen asleep in the press box on more than one occasion, and once, when he was two hours late for a coaching session with the Nippon-Ham Fighters, worried co-workers found him in a drug-induced stupor. 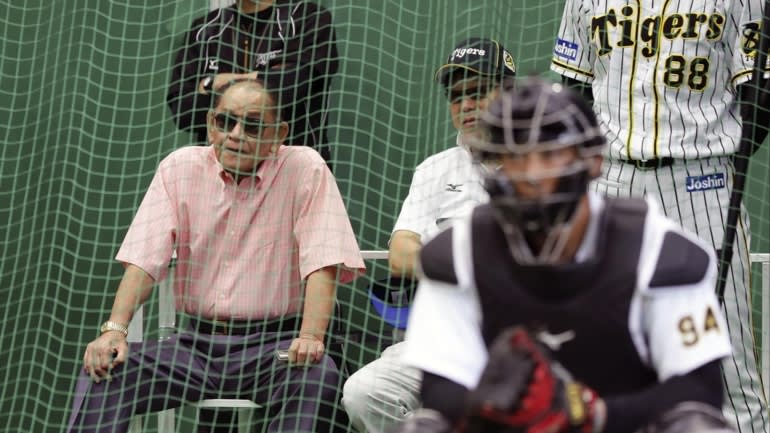 Top: After his retirement, Enatsu became a baseball journalist. Here, second from right, Enatsu is seen with Japanese batting legend Shigeo Nagashima, left, at a game in Tokyo in 1985. On his right is his former manager, onetime Hanshin pitching ace Minoru Murayama. Bottom: Enatsu looks on during a practice session at a Tigers training camp in Okinawa in February.   © Kyodo

On March 3, 1993, the police raided his apartment in Meguro, Tokyo, finding 16 hypodermic needles and several milligrams of methamphetamine. Enatsu was arrested, along with his girlfriend, and the police determined that he had received the drugs from someone in the Yamaguchi-gumi, Japan’s largest criminal organization. It was a first-time offense, for which probation is the usual punishment. But Enatsu refused to name his source and was sentenced to two years and four months in prison. He was 44.

Prison in Japan is not an easy experience. But some guards were former fans. They solicited autographs and allowed him to listen to baseball broadcasts on the radio. “When I climbed into the futon at night,” said Enatsu, “all I thought about was baseball. I remembered all 829 games in which I pitched.” Enatsu served his full term and never named his supplier. On his release Yamaguchi-gumi bosses were waiting to thank him.

In an attempt to start with a clean slate, he threw away all his trophies and burned his diaries. Then he tried to put his broken life back together, marrying his girlfriend, who was also out of prison on probation, appearing in “old-timers” baseball games and writing a newspaper column. In 2000, two nationwide fan surveys named him as starting pitcher in an All-Century Japan team, and in 2015 he was invited to the Hanshin Tigers spring training camp as a coach.

Enatsu said afterward that nothing was as satisfying as wearing the Tigers uniform once more. He is now a baseball commentator.