With a TV series in prospect, its author reflects on how lawbreaking has changed

More than two decades ago I published a book called “Tokyo Underworld.” It sold 50,000 copies in hardcover and paperback in the U.S. and to date has been optioned for production into a film or TV series by five different studios — including, as of February, Legendary. It was published in Japan in translation and hit the No. 1 spot on many lists.

The book was about corruption in Japan, high and low, and how the U.S. participated in it dating back to the days of the Occupation when Japan’s black markets did more to bring Americans and Japanese together than all the work of the starry-eyed experts in Gen. MacArthur’s headquarters.

“Tokyo Underworld” depicted a half-century of crime in a shadowy universe of gangsters, corrupt entrepreneurs, courtesans, seedy sports promoters, streetwise opportunists, intelligence agents, political fixers and financial manipulators who may have done as much in their own right to influence U.S.-Japan affairs as their more refined and respected peers in academia and government, but were seldom mentioned in the textbooks.

Among the more notable byproducts of this subculture — described by Japanese authors as the “underground economy,” the “shadow government” and the “yami shakai,” or dark society — were the following:

— The systematic, large-scale theft by yakuza gangs, working with American GIs, of imported goods from the docks of Yokohama intended for personnel at Occupation headquarters. 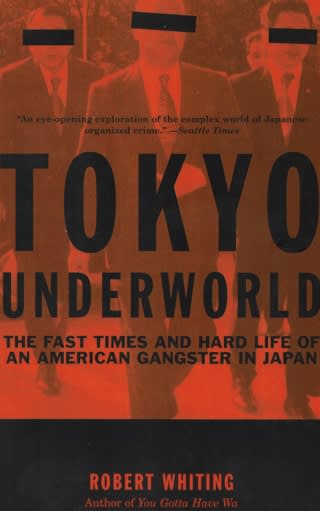 The cover of Robert Whiting’s 1999 book “Tokyo Underworld.” (Courtesy of the author)

— A jingoistic professional wrestling association enthusiastically promoted by political leaders and underworld bosses that relied on visiting American wrestlers to intentionally lose to Japanese opponents and that donated great sums of money to keep the ruling conservative Liberal Democratic Party in power.

— A ruthless Korean gang lord vying for control of the city with the help of the CIA, who needed him to combat the growing communist threat and the great influx of drugs from Pyongyang, funds from the sale of which went to support the Japan Communist Party.

— A yakuza army organized to subdue leftist groups opposed to the stationing of American soldiers on Japanese soil.

— Nightclub hostesses trained in the art of industrial espionage spying in two languages for Japanese and American bosses. 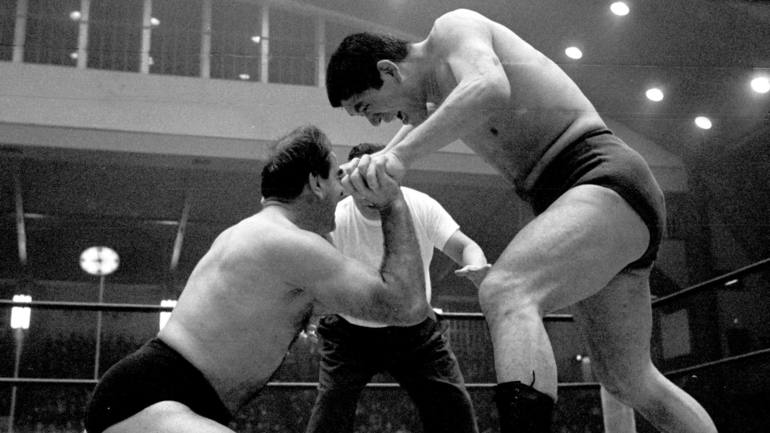 — Aircraft bribery scandals, including the Lockheed affair, which rocked governments on both sides of the Pacific and saw a former prime minister and power broker, Kakuei Tanaka, convicted.

— And assorted con artists, gold smugglers and an American “mafia boss of Tokyo” who made and lost several fortunes — on his way through four marriages — and founded some of the city’s great nightspots where many of these characters congregated.

The story of this bizarre twilight world is a parable of greed, arrogance and duplicity. But 20 years later, as screenwriter Terence Winter (“Wolf of Wall Street,” “Boardwalk Empire”) and producer Sherry Marsh (“The Vikings,” “Pose”) are proposing a five-season drama series based on “Tokyo Underworld,” one might ask the question, What are things like now? How much has changed?

New laws restricting underworld access to bank accounts and office space and respectable business channels have depleted the formal ranks of the yakuza from a high of 180,000 in the early 1960s to less than 30,000, according to Japan’s National Police Agency. But the crime rate has basically remained the same — meaning the yakuza still operate but further underground and in disguised form.

Hangure, or so-called quasi-gangsters from motorcycle gangs like Kanto Rengo, are now doing most of the work.

One recent gangland shooting was carried out with an M16, the U.S. military’s standard service rifle, indicating cooperation between Americans and Japanese in the underground arms business is alive and well. On a higher level, the U.S. Embassy in Japan and the FBI facilitated the visa of a prominent crime lord to receive a queue-jumping liver transplant at the UCLA Medical Center in 2001.

The percentage of foreigners living in Tokyo who are American has halved since 1985 and the hand of the CIA is not as pervasive as it once was. It once donated $1 million a month to the Liberal Democratic Party but phased out its support as the Communist threat in Japan receded, the Vietnam War expanded and U.S.-Japan trade disputes grew.

These days, it is American Drug Enforcement Administration agents in Japan who are more active, trying to stem the tide of narcotics from China and Mexico, which have replaced North Korea as the prime suppliers of crystal methamphetamine and fentanyl. Anecdotally, there is now more cocaine in Tokyo than ever before, and police have adopted a policy of stop-and-frisk for narcotics in certain areas of the city frequented by foreigners.

With the increase in the number of foreigners in Tokyo, many more are active in the crime department, such as the Nigerian scam artists who will rob bar patrons blind in Roppongi, or France’s Mark Karpeles, who ran a bitcoin exchange and was convicted of falsifying data — but acquitted of embezzlement — in 2019.

British national and Sony employee Edward James Montague Reid was arrested in 2017 for possessing 20 million yen worth of cocaine and other stimulant drugs intended for sale; it is unclear how or whether legal proceedings went ahead.

In February 2020 a Canadian citizen named Yoshiya Tateyama was arrested on suspicion of smuggling 240 kg of illegal stimulants in boxes of frozen shrimp, with a street value of $140 million. Nick Zappetti, the American “mafia boss of Tokyo,” made and lost several fortunes and founded some of the city’s great nightspots. (Greg Davis)

The recent Olympus and Nissan scandals both illustrate the perils of being a foreign executive in a Japanese company. In the former, Olympus appointed England’s Michael Woodford as CEO in 2011, but he lost his job shortly after he disclosed a major accounting fraud.

Woodford was fired but the scandal led to the resignation of the company’s entire board and the arrest of several senior executives, and he was awarded 10 million pounds in a settlement.

Lebanon’s Carlos Ghosn became famous in Japan first for leading the restructuring and revival of struggling Nissan in 1999, then for his arrest in the winter of 2018 for allegedly understating his compensation, a circumstance brought about by his enemies within the corporation, but one which he denies.

Ghosn spent months acquainting himself with Japan’s criminal justice system, undergoing interrogation for eight hours every day without his lawyer present and sleeping in an unheated cell with the light on all night. Eventually granted bail, which cost him $9 million and denied him permission to see his wife, Ghosn fled to Beirut.

Space forbids me from discussing other scandals such as that which emerged after the 1998 Nagano Olympics, where the bid committee had spent approximately $14 million entertaining visiting Olympic officials, or the resignation of Japanese Olympic Committee chief Tsunekazu Takeda last year after accusations that a vote-buying scandal helped Tokyo land the Olympics.

There is also the case of an LDP lawmaker from Hokkaido who was arrested and indicted on a charge of allegedly receiving millions of yen in suspected bribes from a Chinese company looking to develop a casino resort in Japan. (He denies wrongdoing.)

Suffice it to say there is as much crime and corruption going now as before, it has just taken different forms.

The “Tokyo Underworld” series may, it seems, finally get made — earlier attempts were bedeviled by lawsuits, unrelated to me, and studio politics, although I did get to spend an afternoon with Martin Scorsese, who was going to direct the ill-fated Warner Bros. project.

If “Tokyo Underworld“ does come out and Hollywood wants a sequel, there will be more than enough crime to write about.