Ringing in the New Year in Japan

Ringing in the New Year in Japan

A three-day national holiday, the most important of the year, Japanese honor the event with quiet family reunions and visits to the nearest shrine to say prayers for the coming 12 months.   © ReutersROBERT WHITING, Contributing writerDecember 31, 2020 08:00 JST

TOKYO — New Year celebrations in Japan are quite different from typical western observances of the holiday, which are marked by alcohol-fueled countdown parties and noisy merrymaking, typified, perhaps, by the annual Times Square gathering seen on global television.

The first three days of the year are national holidays and have been since 1873, five years after the Meiji Restoration, when Japan adopted the Gregorian calendar. Japanese honor the event with quiet family reunions with special New Year’s dishes served, visits to the nearest shrine, to say prayers for the coming year, and shopping expeditions to department stores for new year sales bargains.

On New Year’s Eve, people might stay home to watch NHK’s long-standing marathon songfest or venture out to a local temple to hear its bells being rung out 108 times at the stroke of midnight. (The number 108 symbolizes the number of earthly desires that cause human suffering and the act of ringing the bells is believed to purify the mind for the new year ahead.)

In Tokyo, the most popular spot is the magnificent Meiji Jingu in Shibuya, a stately, serene complex of trees and Shinto structure. As midnight approaches, the crowds, clad in their finest kimono attire, are so massive it is impossible to move. Women in traditional costumes walk beneath decorations for the upcoming New Year, one of the more muted in history, thanks to the year-end spike in COVID cases in Japan.   © Reuters

If New Year in the West has a corollary in Japan, it is the bonen-kai season of year-end drinking parties held in December by corporations for their customers. Bonen literally means forget the year and by virtue of the copious amounts of alcohol that are served at these events, a great deal of forgetting is done. Concerts featuring Beethoven’s 9th symphony are also a tradition, the music introduced to Japan by German prisoners-of-war during WWI, with Christmas itself having a decidedly nonreligious spin.

Only about one percent of the population of Japan is Christian. So little was known of Christianity (which was banned for 250 years during the feudal Tokugawa era) that during the immediate postwar era when the presence of westerners in Japan celebrating Christmas was at its peak, some Japanese confused Jesus and Santa Claus, which made for some interesting department store window displays: Santa on the cross, Jesus in a sleigh with reindeer.

For most Japanese citizens, Christmas was just another day on the calendar. Over the years, however, it became an occasion for colored lights and parties which featured special Christmas cake and, more recently, Kentucky Fried Chicken party barrels, which became popular thanks to a highly successful KFC Xmas marketing campaign. In the 1970’s. Christmas also evolved into a romantic time to spend with one’s significant other, most typically at expensive restaurants and hotels, which are packed during this time. It later came to be said that more women in Japan lost their virginity on Christmas Eve than any other time of the year. Condom sales reportedly spike in the month of December.

I have spent many an enjoyable Christmas Eve in Tokyo with my Japanese wife and many an enjoyable New Year’s holiday with my wife’s family in Omiya, pounding mochi, eating the New Year delicacy zoni (soup with rice cakes) and other traditional Japanese New Year’s foods and getting drunk with my father-in-law father. He was a railway engineer with Japan National Railways who specialized in large engines and he liked to discuss German philosophy — Hegel no less — using his Taisho era Japanese.

I had no idea what he was saying half the time. I had enough difficulty understanding Hegel in English. When he got on the subject of Kant, it was even worse. But, he was a kindly, cultured man and he seemed to welcome me without any major reservations, which was not always the case in international marriages in Japan. (I know of one Tokyo family who had threatened to disown their daughter rather than accept an American into the family. 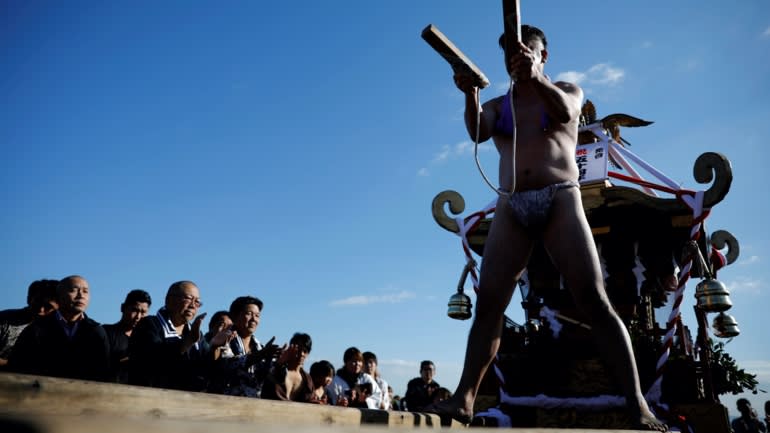 New Year celebrations in Japan are quite different from typical western observances of the holiday. Here, worshipers pray after carrying a “mikoshi” or portable shrine in the sea west of Tokyo on Jan. 1, 2020 to wish for calm waters.   © Reuters

The mother had crawled across the tatami and begged the prospective groom to call the whole thing off and go back to the United States. They even offered to pay his way. The couple got married all the same and the parents did eventually come around, although it took three years.) They were a modern, educated, open-minded and close-knit family. I felt very fortunate to become a part of it and a part of their New Year celebrations.

This time around, New Year’s is one of the more muted in history, thanks to the year-end spike in COVID cases in Japan, the proverbial third wave. According to a survey by Tokyo Shoko research, nearly 90% of all companies skipped their traditional bonen-kai in 2020 as well as their traditional welcome-the-new year parties.

Moreover, Emperor Naruhito canceled the annual new year event at the Imperial Palace, which normally attracts huge crowds. It was the first time the event was called off during in the wake of the death of his grandfather Emperor Hirohito. Government officials have also requested people avoid large gatherings and urged businesses to extend the normal three-day break from Jan. 1 to Jan. 3 in which trains planes and highways become packed with people returning to their hometowns, all the way to Jan. 11, 2021 as a decongestion measure. Major department stores have also moved up the sales of their traditional fukubukuro (lucky bags) from early January to December to reduce the usual crowds.

Summing it up, the Japanese New Year holiday is not quite the same as in other years but in this time of the new coronavirus, not much anywhere is.